The Residency at Xingdu Pottery Village

Robyn Gill organised our residency at Xindu Pottery Village for 10 Sunshine Coast ceramics artists. Xingdu is in a suburb of Jingdezhen and is on a  bus route that took us into the middle of the city and onto the Sculpture Factory and the Pottery Workshop  (another residency founded by Caroline Cheng). Xindu is in the middle of a big pottery production area so we had a good mould maker, throwers, painters, big pot makers, glaze shops, kiln shops and so on all close by. There were also several big and small galleries.

Our residency accommodation was in a rented house, which was adequate but not great. We had to clean the whole house before we could live there!  There was much confusion when we arrived when we realised there was not enough beds - we were not going to share double beds when we understood we were to have single rooms. Anyway we did sort it out and the organisers were very helpful in the end. Mattresses were very hard - but this is China, apart from good hotels. The biggest problem for some of us was the lack of facilities and disorganisation of the studio space - the Chinese organisers were not potters, so the wheels were not good (either on or off, with no speed adjustment, if they went at all), and the first batch of clay that we thought was white porcelain was a dirty grey when fired (very disappointing). The wheels also took several days to arrive, and one wheel arrived after the last firing!  However the super white porcelain, the translucent clay is a delicious white when fired, a beautiful clay. The clays are fired to 1300 deg C - very high by our standards. The glaze shops supply glazes already mixed - absolutely gorgeous celadons, and the best glaze shop is near the Sculpture factory - where the best tool shop is too.

Near the Sculpture Factory/Pottery workshop is a regular market run by the students at the Ceramics Institute - this was fun as the work changes from week to week (photos in another post). Also Jackson Li's brush maker is in this market square. The Pottery Workshop residency is in an interesting area of Jingdezhen with more variety of shops and small factories close by. 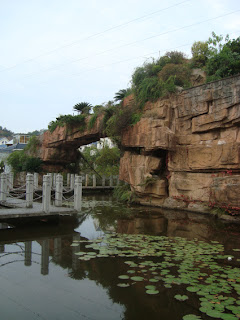 The area where we stayed - looks much better here than in reality. It is a gated area with some very expensive houses, some being renovated (everywhere in China lots of renovations), and lots of piles of rubbish. Apparently several artists live in this area, and art dealers but we didn't work out who they were. 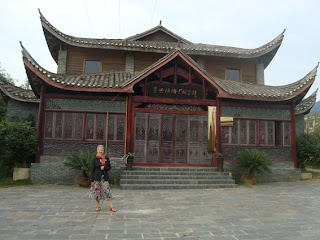 The outside of the studio - it was a buddhist temple, complete with shrine inside that the locals still use - this was really special and gave the workshop a lovely energy. 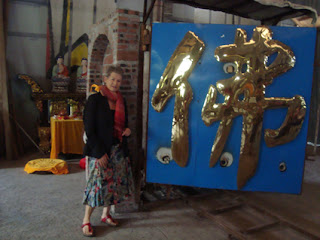 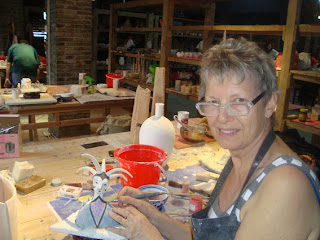 We did produce some work, but struggled with the clay - so hard to use as hand building clay as it was incredibly fragile at leather hard stage. Chinese work is usually once fired, but because the clay was so difficult we bisqued our work. 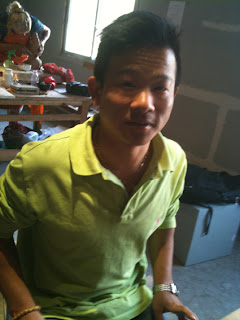 Our wonderful Eamonn - who looked after us. 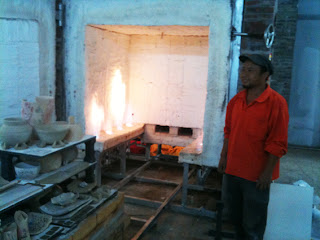 The kiln master testing the kiln burners. For every firing he fired to his schedule (mainly controlled by when he wanted to go home) - the two glost firings were quite short (one glost to 1300 deg C was only 7 hours), resulting, we think, in some colder spots in the kiln, and under fired work. 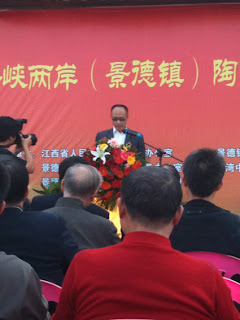 Mr Feng with the important people (like the mayor and chief of police) at the opening of the XIndgu part of the International Ceramics Fair (more photos on this later  - it was huge). We had our work in this exhibition, with other painters and ceramicists. 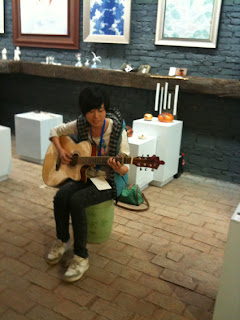 Our work in the background at the exhibition. 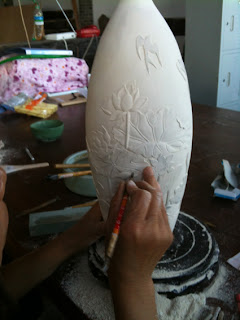 A carver came to demonstrate  in our studio for a couple of days - exquisite work. 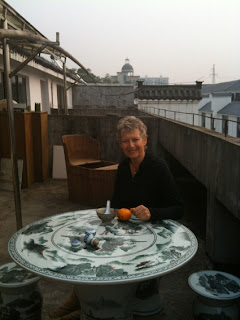 The back deck of our residency. 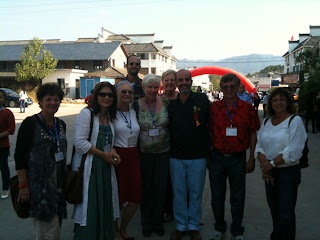 Our group at the exhibition opening. 10 Australians and 3 Brazilians (not all in this photo) 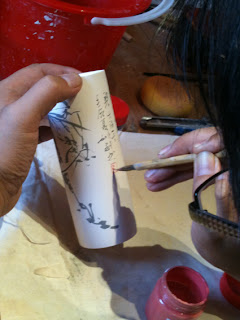 A beautiful pot being painted by a professor from the university - a well know ceramic painted. Just lovely.

Posted by Ellen Appleby at 8:00 AM

Hi Ellen, I'm enjoying your posts on your trip. What ever the disappointments with clay, firing or accommodation it was obviously an amazing experience...

You are lucky to have this experience! Congrats!