Not going to plan!

A few surprises this week, some good, and a few not so good. After two relaxing weeks in Samoa coming back to Noosa has been like a whirlwind. I drifted into a new Hastings St art/gift shop early in the week quite by chance, and showed the owners photos of my work, and they have decided to take some of my vases... great news, except I had to push a firing through this week, which was not planned.

Opening the kiln this morning... oh dear... luckily the vases for the shop were ok, phew. But my newer work with the beautiful satin white glaze that I tested last firing was a mucky yellow, and it RAN. Was the kiln too hot? I don't think so. All day I have been wondering what went wrong, and then I checked the glaze recipe.... lesson one, check and double check quantities in glaze recipes, and never write down 29.3 instead of 2.93 (and don't make up glazes while recovering from jet lag). Too much Gersley Borate makes a glaze runny and yellow... now I know. 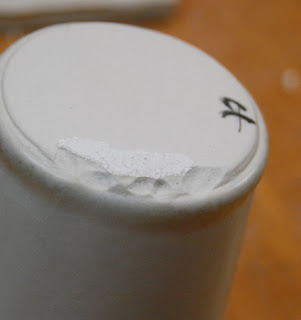 Still no big disaster, apart from a few spoilt pots, my kiln shelf is retrievable.

Next surprise was firing an acrobat sculpture to a higher temperature than I usually do ... a few lessons learnt here too, as there was too much weight on her arms, and the join split under her arm. But I am quite excited about using a mud crawl glaze over underglaze colour to create texture. 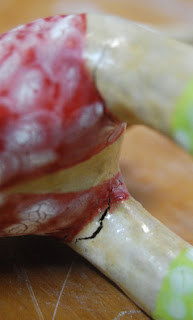 And finally my decals tests continue.  They fired so well on a bisque tile at 1000degC, a beautiful sepia colour. But look what happened when I put a clear glaze over it. Obviously the decal does not like to be fired to 1200degC (although Justin Rothshank said that it was possible). Next test is putting the decal over the glaze and firing to ^016/017, which is the normal way to fire a decal. I should stop trying to be clever! I'll keep you posted on that test. 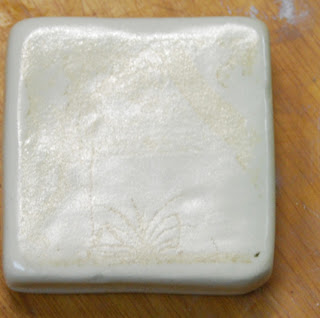 So all in all, a week of the unexpected. Maybe next week I'll find time to upload my photos of Samoa, and find sometime to get back into that holiday relaxed state of mind.

Don't forget to check out mud colony to see what other potters are doing!

Posted by Ellen Appleby at 7:59 PM

hope you share some of your photos of Samoa.. Also interested in your decals so look forward to more posts on those too :^) Congrats on the new sales venue - well done!